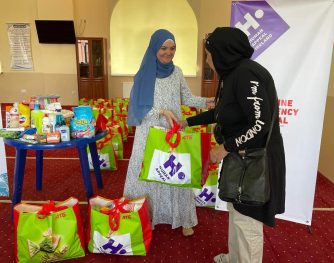 Islamic cultural centers of Ukraine continue their charitable actions.  This time, activists of the Ukrainian Muslimahs League, with the support of the international charitable organization Human Appeal, distributed 200 sets of household chemicals. 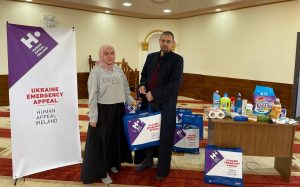 Volunteers of Ukrainian Muslimahs League in Kyiv, Vinnytsia and Lviv helped those who were most in need of support during this turbulent time.  Each kit contained laundry detergent, shampoo, soap, toothpaste, tissues, detergents, trash bags, personal care products, etc.

The project consisted of three stages: the first took place in Lviv, where 50 sets were distributed, the second was implemented in Kyiv — 100 sets of household chemicals;  the last promotion was held in Vinnytsia, where people received 50 such sets. 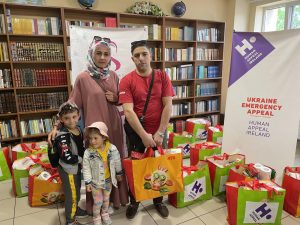 According to the head of the Ukrainian Muslimahs League, Niyara Mamutova, the majority of aid recipients are immigrants from the eastern part of Ukraine:

“Now it was very important and necessary to distribute sanitary kits to women, because most of the families are immigrants from the eastern part of Ukraine, where they fled from the war, leaving all their belongings behind.  Certainly, no one, fleeing, took hygienic means with them.  They were also distributed to women who returned home.  In such difficult times, I wanted to help as much as possible.  The sets included the most necessary and useful things for the family.”

Those who received help sincerely thanked the organizers:

“The war and the unstable economic situation in the country affect the situation of Ukrainians.  The Council of Ukrainian Muslims understands the importance of such actions to support those who need it the most”, says one of the parishioners of the Vinnytsia ICC.