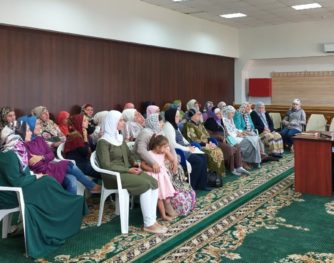 Ukrainian Muslimahs League not only holds events in different regions of Ukraine, but also has enough experience to share abroad. Thus, Head of the League, Ms.Olha Fryndak, who had a private visit to Moldova in August,  was invited to give a lecture for her sisters in faith from Moldovan muslimahs League. The meeting took part on 18 August.

Ms.Fryndak exemplified her lecture with success stories of Muslimah volunteers from different regions of Ukraine, who, despite having jobs, education in process, and kids, managed to find time for being useful for both the local communities and the overall Ukrainian Ummah and Ukrainian society. By not dividing Muslims and Non-Muslims, the UML’s volunteers share true information on Islam and combat stereotypes, strenthening interfaith peace and cohesion.

According to the lecturer, who had already spoken for Moldovan Muslimahs several years earlier, she was really happy to see the increased activity of her Moldovan sisters in faith. She mentioned that last time, there have hardly been a dozen women in the audience, while, three years later, now there were over three dozen.

The cooperation wasn’t over after the lecture ended: the MML asked Ms.Olha to make a training on organizing and coordinating the team’s work as well. So a week later, on 24 August (Ukrainian Independence Day), they had another meeting where they learned how to analyze the situation, set goals, define their abilities, strengths and weaknesses, and define what they were eager to invest in the cause and what was their targeted audience. They also spoke about working as a team, developing common rules and sharing responsibilities.

Each participant got some homework which they have to send to their trainer in September. That must help them define their main fields of work and how they are planning to grow in order to fulfill the roles chosen.